Bima was another one of my extreme rescue cases. I met him sometime in July 2015, and he was the skinniest, saddest looking stray I’d ever met. He had a hole on his nose, and that time I thought he had been hit by someone. I fed him every day and was trying to get close to him, but he just wouldn’t let me. He was very cautious. 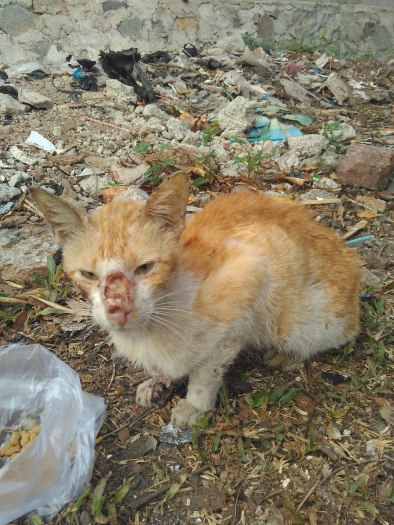 I continued feeding him and I noticed the hole on his nose was getting bigger. He also started to have new wounds on his legs. I still had no idea what caused it, since it was the first time I encountered a cat with such injuries. I kept trying to rescue him for about a month, when an animal loving friend encouraged me to rescue him immediately. He needed help desperately.

So I did, and I took him to my usual vet, Doc Ida. That day his whole demeanor changed. He seemed trusting, and appeared relieved, as if he knew that we were trying to help him. I named him “BIMA”, which is one of Javanese shadow puppet’s characters, known for his strength. 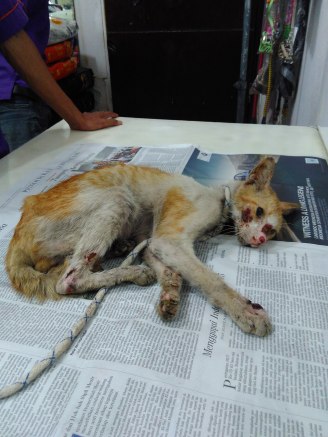 After days of observation, we suspected his wounds were not caused by abuse. So I took him to a more senior vet – the one who performed Lily’s amputation – and he said it was cancer. My heart dropped, and I didn’t know what to do. There is no cure for cancer and to let him live on would only add on his suffering. I consulted a friend who has a special ability to communicate with animals and she told me he wanted to live, and feel loved in his last days. 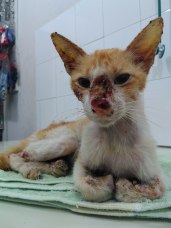 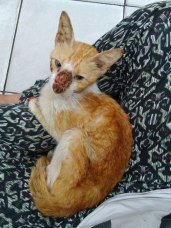 So the senior vet performed a cauterization – a medical practice of burning of part of a body to remove or close off a part of it – and I started looking for a home for Bima. I visited him every day at the clinic and he was just so lovely..he loved being petted and sitting on my lap. I would let him out of the cage and he would walk around and explore the clinic. He was having trouble breathing, and his body was literally all skin and bones, but he was one of  the sweetest kitties I’ve ever met.

After a few days, to my surprise, a very kind lady agreed to adopt him and provide him with love until he passed. He had spent three weeks in the clinic before he got adopted.

It was one of the most heartwarming things I had experienced, to see someone so caring and patient and accepting of a cat with such condition like Bima. In his new home, he was loved, very well taken care of, and treated like family. I am forever grateful to a friend who introduced me to Bima’s mommy. 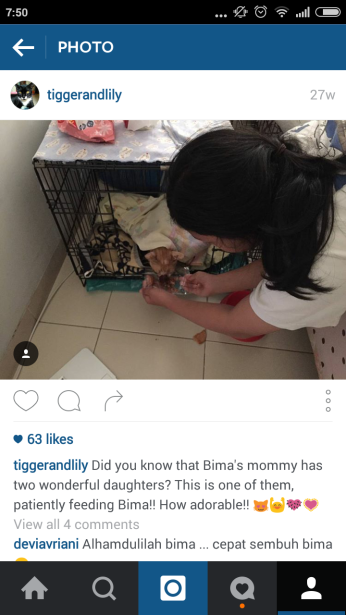 A month after he got adopted, he passed, surrounded by his adopted brofurs and sisfurs..and people who loved him like family. We were all saddened by his passing, but at the same time blessed to have given him the chance to feel loved. We never knew how long he had to survive on his own with his sickness..but we are forever inspired by his strength and amazing will to live. Today, I look back and remember what a sweet and strong boy he was. I wouldn’t change a thing, and he is forever in my heart. Run free at the rainbow bridge, Bima. Until I see you again. 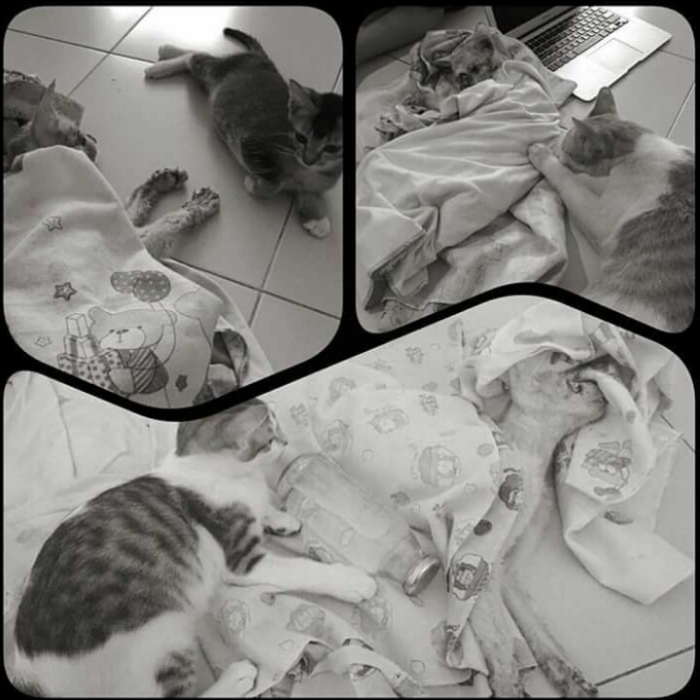 Nikko was another classic example of neglect. That one morning on January 9th, as usual,  I went to my street feeding spots. On the way, I saw a tiny kitten sitting at the side of a street. He was newly abandoned, because I know all my babies and it was the first time I saw him.  The sight of him really broke my heart. He was weak, skinny, and looking sick. I put out my hand to reach him, and to my surprise, he was super friendly. He let me pet his head and neck. I wouldn’t forget that look he had, as if he was saying “I’m lonely and scared, will you please help me?”

So I held him and took him to meet one of my colonies. He was starving, and was eating so much and so fast. He might have not had any food for days. 😦 I had no choice but to leave him there with my colony, because I can’t bring him home. (I live in a studio apartment which doesn’t allow pets, and I’ve “smuggled” Tigger and Lily to live with me secretly.)

It was so hard to leave him there. I told him to be a good boy and stay, so I could visit him every morning.

The next day, I was so happy to see him there !

After two days, he still looked sick and skinny, but he was a bit cleaner. His eyes were no longer covered in crusts. I saw a spark in him. He has this amazing survival spirit, and he always eats a lot every time I visit him.

The rainy season has started here in Jakarta, so I’m still not worry-free about leaving Nikko outside on the streets. I’m always worried about my stray babies anyway. But Nikko is special because he is younger and smaller than everyone, and he isn’t really the healthiest kitten around.

About five days after I first met him, I started to see some improvements. His eyes were brighter, his fur cleaner, and he started to gain some weight.

But his belly was too big for his small, bony body, so I gave him his dewormer and supplements like Virgin Coconut Oil to boost his stamina against the bad weather. I also took him to the vet and they said his belly is still adjusting to the food he’s having, because he seemed to have been without food for a while. 😦

Two weeks later, he is still alive and kicking. He’s one of the most adorable kittens I’ve ever met. He takes his food like a champ, and he doesn’t back down even though his bigger siblings swat him to claim the food. He’s such a strong, brave kitty and I tell him that every day. I always make time to hold him in my arms to let him know he is loved. I think he knows it, because I can see a difference in his look, than that first time I met him.

It’s the most heart-warming, rewarding thing to earn the trust of a kitty, and to be able to give them a second chance. To see them transform from an unwanted kitten, to a healthy, strong kitty, is priceless. 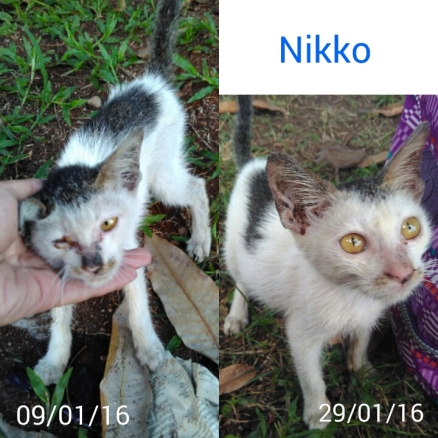 So humans, please be kind. They’re all around us, and they need our help. Not our pity.

I met Lily on November 23, 2014. It was a sunny Sunday morning and I was going for a jog at a housing complex near my apartment. I saw a cat chillin’ under a motorbike and I stopped to feed it. (I carry dry food everywhere)
I was shocked when she turned around, because I could see that all her FOUR paws had broken off, showing her bones and flesh. At first I thought she was sick. I looked closer and was petrified to see traces of rubber bands tied around her paws!!
I immediately felt lightheaded because I couldn’t believe someone would do something so disgusting like this. 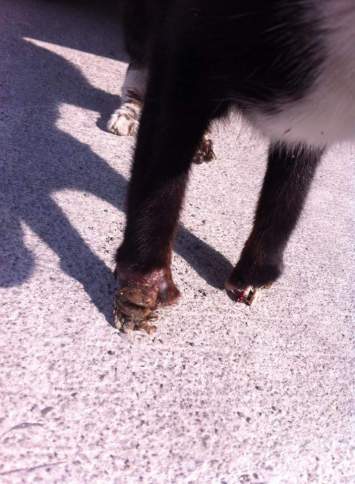 It was a horrible sight to see… She was still walking even with her paws broken off like that.. I couldn’t imagine the pain she had to endure.. How did she look for food? How did she defend herself? How did she survive? 😦

At that time I hadn’t had any experience in cat rescue world, but my instinct told me to keep her safe and take her to the vet immediately. The vet team were horrified to see Lily’s paws. It was the first time they witnessed such cruelty.

She then underwent two surgeries to clear off the protruding bones in her paws. I didn’t think she could ever walk again. I thought she would have to spend the rest of her life sitting in a cage.

Boy was I wrong.
About a month after her second surgery, she started walking on the bed. Slowly, but sure.
After some time, she started to walk more confidently on the bed, or other soft surfaces.
Now, she walks, runs, jumps, and plays around like a normal cat. (Providing she does all this on my bed)

She inspires me every day. She is such a sweet, loving cat, despite having been mistreated by humans. She loves being petted and she is also very loving towards her antisocial brofur, Tigger. :p
Lily the pawless kitty is a true survivor, and an inspiration. I hope more humans will be aware of animal welfare, so no more kitties have to suffer because of their ignorance.

It takes nothing away from human to be kind to animals. 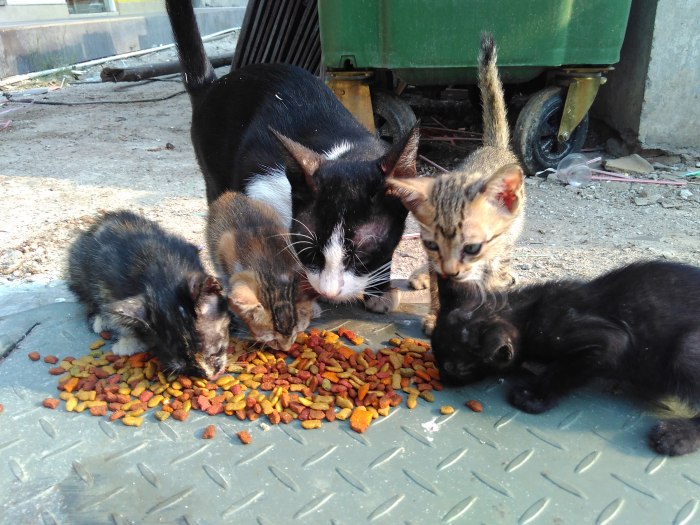 My love for cats started way back when I was very young. I’ve always loved them. But my obsession with cats started about a little over a year ago. That was when I met Lily,  my pretty pawless kitty. I rescued her in a horrible condition, with four paws broken off because some irresponsible,  heartless humans tied rubber bands around them. I will post about the details of her rescue story in another post.
Since then,  I began street feeding actively. I started with two colonies in a housing complex near my apartment, and now I have ten colonies with around 50 cats to feed every morning. I didn’t plan it to grow this big, it just happened along the way. I can only feed them once a day before going to work, because that’s what I can afford at the moment, and I need to juggle between work and cats. I take sick ones to the vet, and prioritize on urgent rescue cases. It definitely consumes a big chunk of my time,  energy,  and money, but I love doing it. It is true what they say, in rescuing  animals,  you lost your mind, but found your soul.

Last year I managed to have around 30 cats fixed; rescued and found homes for about 37 kitties. A small number maybe, but every rescue story is special, and every time I learn something new. It does get overwhelming at times,  but when I see how I’ve changed the life of a cat who was abandoned, starving, injured, or abused, and found them a warm loving home,  it makes all the work and sacrifice worth it.

I started rescuing by myself, but now I have a wonderful partner and a concerned friend who donates monthly to support my street feeding and rescuing.  Hopefully we can do something bigger in the future.